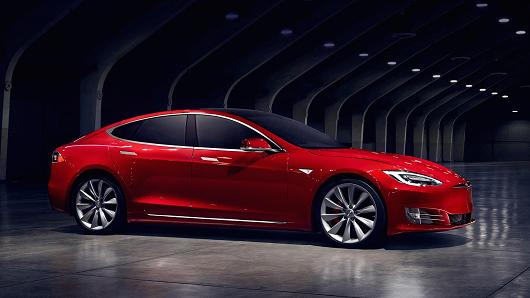 When Tesla introduced the Model S P100D this past August, the company said it had made the quickest full production car in the world, with the ability to go from zero to 60 miles per hour in a mere 2.5 seconds. Now a Motor Trend test has found that a recent software update can push the car even quicker than that, to a mere 2.28 seconds — 0.02 seconds faster than any production car Motor Trend has ever tested. In November, Tesla Chairman and CEO Elon Musk began telling followers on Twitter to expect a “Ludicrous+ Easter egg” software update that would unlock the car full power, shaving 0.1 seconds off its acceleration time. With Ludrious+ engaged, the P100D is even quicker than Musk himself had expected, though upon seeing the results he tweeted that the car could likely improve its performance more if one were to remove the car floor mats and front trunk liner. While the Tesla is quickest off the line, things start to change once the cars hit the 60 mph mark. Electric cars are known for delivering torque better than internal combustion engines, which helps them accelerate rapidly. However, as Motor Trend notes, the engines of the other supercars give them the advantage at higher speeds. At 70 mph, the LaFerrari edges ahead, followed by the Porsche 918 Spyder and the McLaren P1 at the 80 mph mark. Tesla did not offer any additional comment on the news.